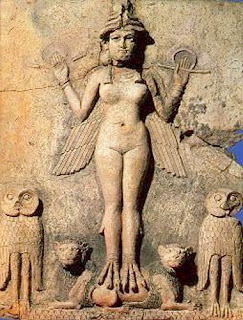 I recently read a piece by Ani Chankoladze, http://www.gwi-boell.de/web/democracy-cultural-stereotypes-women-georgia-society-rolls-3127.html a student at  the Gunder Werner Institute in Germany about how Georgian men categorise Georgian women. There are 4 categories, The Holy Vessel, the Porcelain Doll, the Caramel Candy and the Bitch.

Women who are not Georgian are defined  by the Orthodox church as being modern. By modern the patriarchal orthodox society of Georgia  assumes  the understanding that women belonging to this group are Western, or Westernised. If they are Western, they are whores.
I will just say that again.  Western women are  whores.

Defining a woman as either a virgin or a whore is not a new thing in any society.  The existence of Lilith in biblical mythology  is testament to that. Although a discussion with an English lecturer at Tbilisi university showed lack of knowledge about Lilith and complete denial that such a character existed. (1)  This virgin whore juxtaposition for women is perpetuated by the church and is a form of social control so to read about the Caramel Candy and the Bitch in Chankoladze’s article as alternative categories for women was quite enlightening.

Thinking back to my relationship with Davit I can see how it may have been difficult to place me in any of these roles although I think he settled on the Caramel Candy  category.  Being referred to as  ‘tasty’ then, as now, makes my skin crawl. At the time I took it as a quirky Georgianism, an intimate language  between  a couple planning to marry however  it did feel slightly derogatory  at the same time.  I live in Yorkshire where the term ‘chick’ is a term of endearment,   used by and for either sex, so I ignored the animal connotations.

Because I write about what I have learnt and continue to learn about how women are perceived by Georgian men (2) and the effects of that,  I would imagine my status has  now changed. I am now,  I would imagine,  the Bitch.  Except that I am not the bitch because I am not Georgian, so that must make me, a whore. That is if you allow yourself to be defined by the (majority of) Georgian male.

I would like to offer an alternative. One which every woman from every culture, across every land can access and re-claim. I would like to invite Georgian women to step outside  the gender stereotype and define themselves.
Be the Witch.

The Witch has not always been despised and feared. (3) Through -out time and history the witch and the wise woman have been associated with a celebration and connection with the earth, the seasons and the essential life giving forces of nature. It is only men, who have, over the centuries  demonised this relationship to suit themselves mostly because they are frightened of female sexuality and the power that brings.  I mean sexuality as part of individuality.  A woman in her own right, not as defined by a collective state or  a family all too willing to disown and abandon  her should she not put the collective first is a real threat to the status quo.

Right now, in Georgia a Presidential election is taking place. One woman, Nino Burjanadze is (or was) a candidate.  At the last poll count she was coming in at 8%.  Currently there are only 11% of women in parliament. There are ingrained and inherent barriers that women must overcome before the priority for them is seen as anything other than, ‘taking care of the family’ (4 + 5) and whilst most women are now working out of the house as the main bread-winners they are also then going home and doing all the domestic tasks. The double-burden.  Child- care is left to grand-parents. Men feel further dis-empowered and often spend their time drinking the wages their wives bring in. Grand-parents instil archaic and soviet style attitudes on children and woman, often the only ones exposed to any potential positive change, are berated and beaten if they stepsout of line.
Black eyes are common.

What would happen if Georgian women, instead of fantasising about  love as portrayed  in the  poem The Knight in the Panther’s Skin, by Shota  Rustaveli,   (6 +7) which is currently used to reinforce gender control, knew more about the ancient powerful women of their  own culture? Goddesses like Ainina and Danana ‘da+nana’ derived from the ancient Persian (Iranian) Anahita who was the goddess of all water  and associated with fertility, healing and wisdom.  What would happen if women in Georgia knew that their fore mothers and fathers revered the power of the Sumerian goddess Inanna , the goddess of love and war and who stood equal amongst all men and women.  (8+9)

I wonder if Georgian women would feel more powerful   and connected to one another if they knew about these powerful deities, these wise women, these witches  from whom they are descended?

Women don’t even feature in the ancient Georgian myth which talks about God who, when he was distributing lands to different nations rewarded the Georgians for being late!  Georgians came late because they were feasting and drinking toasts to God (the supra is an essentially a male pass time) and so Georgians missed their turn. God therefore gave them what was left – the land he had kept for himself.

The Georgian Dream candidate  Giorgi Margvelshvili has just been elected as the new President. The new Prime Minister, hand picked by Ivanashvili  a puppet of  the current PM will be in place this time next week. I wonder what this clutch of men, in cahoots with the orthodox church will concoct to prevent women from learning about their magnificent sisters from the past, the wise women, the witches.

Women need to become witches and education policies, the media, new literature, art and politics need to let them.

I know…  Georgian dream on Sarah

Other texts referenced
http://www.go-governance.com/projects/projects-women/41-women-in-politics.html
http://crrc-caucasus.blogspot.co.uk/2012/05/women-in-parliament-how-do-georgia.html
Posted by Sarah at 10:31 No comments: